Thank you for your interest in learning more about me.

I grew up on a farm just outside of  where hard work, determination, honesty and integrity were highly valued assets.   I adopted those values fully, and continue to aspire toward them.   It was there that I also gained a deep and abiding appreciation for the land, and since then I have always felt more "connected" when I am near areas in which farming is paramount.

Music was my first love.  Growing up, I played piano and sang in choirs.  While studying music in Winnipeg, I directed my first children's choir.  Since that time, I spent 28 years conducting one choir after another, from children to adults.

For me, music is a way of expressing the visual images that we have in our minds.  It is a way of "painting" the sounds of our lives on imaginery canvasses, for all to share and appreciate.   For me, it is not so much that I want to express the colour of sound, but rather to re-create the sound of colour:  that which makes us all "alive".

Most of my adult life was spent in , where my most cherished “accomplishment” was raising three beautiful children.  Over and over, they have given me inspiration, unconditional love and hope, and reminded me of the importance of youth and innocence, wide-eyed wonder and dreams.  I now have six incredible grandchildren who revive those memories each time I put my arms around them.

Not surprisingly - at least to anyone who has lived there - being in the prairies gifted me with an appreciation of the amazing nature of "sky"!  It's alive out there.  Each day, it adds its own unmistaking personality to the world beneath it.  Sometimes I would drive out of the city, to experience the openness of the waving fields of grain and immense sky, and I would be reminded of "back home" - standing on the shores of Lake Erie or listening to the rustling corn fields whispering whatever secrets they held.  I felt awed at the challenge of properly capturing and conveying these moments.

Life's "cycle" has brought me back to my birthplace.  I am surrounded, once again, by the many fond memories of my childhood and the warmth and support of family and friends.

It is here that I started painting in 2006.   Thankfully, I've experienced the freedom and "magic" of transforming the many beauties around me into paintings.   And when people bring their cherished photos to me, I feel humbled and grateful to be brought into the circle of the beauty that others, also, have known.  The first painting that I sold is of a sunflower that was unfurling its petals in my garden.  It's called "Unfolding"...and ever since, that's been my philosophy.  I'm forever unfolding.

Since I've been in Ontario, I've ventured into a number of fields, including court reporting, teaching and office work.  I've made new friends and lost new friends.  Always, always they become a part of my heart.  In 2011, I did a painting which I named "Janus".  Janus is the Roman "god of beginnings".  In this world's standards, I suppose I'm not much of a "success".  However, each day I'm reminded of beginning again and taking that forward step.  As I've told my children many times, that's what counts.

I would love to do a painting for you! 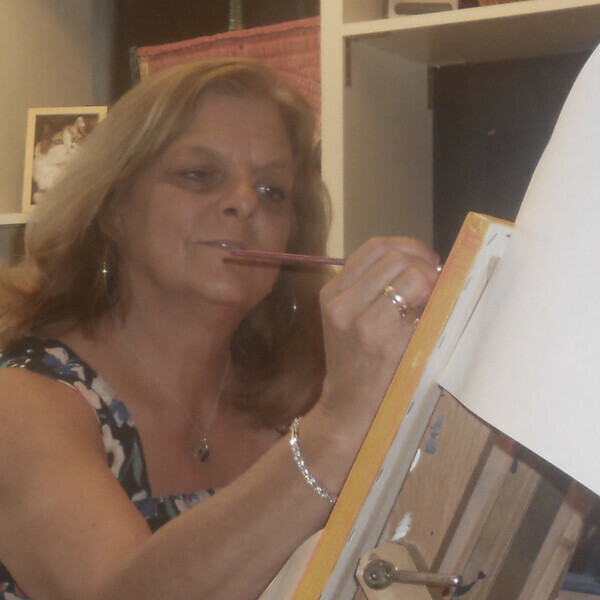