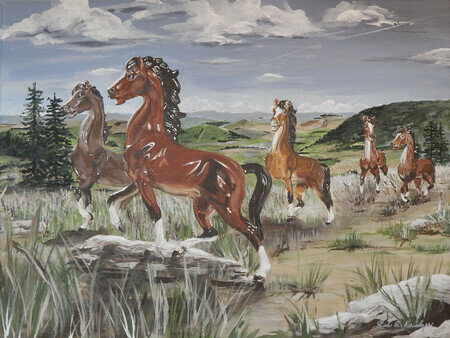 Inquire about this work

Okay. I learned quite some time ago that if I was to paint an animal, especially a pet, that people wanted to see that it was definitely THEIR pet...not just any dog or cat or budgie or horse...but THEIR dog, cat, budgie or horse! And, thankfully, I have had the pleasure of painting people's specific pets, with a satisfying degree of success.

But lately, I've had no requests. So, I was looking at pictures of horses online and feeling so drawn to them. When I was growing up, I really wanted a horse/pony and one Christmas when I was probably 9 or 10 I really had convinced myself that I was going to get one! Haha! Dream on!

Anyway, also when I was growing up, my sister Joan and I were left to do various jobs around the house each Saturday. One of the jobs was to dust the living room. I actually liked this job because Mom had many beautiful knick-knacks in the china cabinet and elsewhere and I could let my imagination go free as I dusted each one with care.

My favourite, though, was the glass/chine/ceramic (I never knew which it was!) horse that took prominence in one of the cabinets. I remember running my hands down its back and feeling the sturdiness of the legs, and imagining it running in a pasture. The horse was originally meant to be a lamp of some sort, having the place for a lightbulb in the back, but I can't remember it ever having a cord, which made it even better for envisioning it being wild and free.

Mom promised that horse to me and in 1977, I became its owner. My children will most likely remember it in our house as they were growing up.

So, to shorten this long story (haha!) I decided to paint "my" horse this past couple of weeks. All of the horses in the painting are different angles of the same.

But where to set it! I've only been to Cypress Hills Interprovincial Park once in my life. It's found in the southwest corner of Saskatchewan and, for those of you who think of the prairies as only being flat, it is the highest elevation in Canada east of the Rockies to Labrador (a bit of geography lesson for you, too!). When I was in Cypress Hills, it reminded me very much of the Ponderosa ranch on the old tv show "Bonanza". (see, you even get a bit of nostalgia!). I could imagine wild horses running over those hills. So, that's what I tried to emulate in this painting.

The painting is definitely available to anyone who wants it, but like I said, unless its an exotic animal, like a print of a zebra or elephant from Pier One, most people don't seem to be drawn to a domestic animal unless it's theirs.